Bournemouth 1-2 United; 5 Things We Learnt From The Victory at the Vitality Stadium.

Saturday, November 03, 2018
Manchester United paid a visit to the Cherries for a match day 11 clash at the Vitality Stadium.

An initial 'gra-gra' saw Bournemouth score in the first 10 minutes.However  a Fergie-time comeback ensured that Manchester United came out victorious. 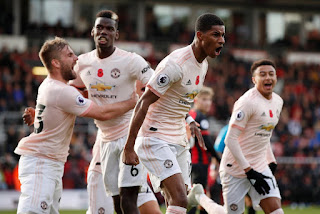 Here are five(5) things #ManUtdNaijaFM learnt from the clash: Today, despite United's poor form, the Vitality stadium luck shone again and the complete 3 points were taken in 'Fergie-time'.

2. PAINFUL 30 MINUTES
The first  30 minutes of the first half was a horror movie. It was painful to watch United. Bournemouth converted the game to a practice session.

We chased the ball like children trying to  catch a butterfly. There was no shape,  no rhythm, we were one goal down and did not register a shot even off target.

3. LUCKY BIRTHDAY BOY.
The 'whiz-kid' of Manchester United, Marcus 'Rashidi-Yekini' scored the winning goal from the bench. After celebrating his birthday within the week, he was lucky to have made up for the 'empty net' he missed earlier on. 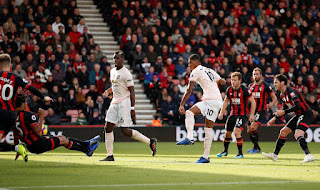 If United had dropped points today, his birthday bash would have been a bashing from fans.

4. ANTHONY 'IKECHUKWU' MARTAL.
The French 'embarraser-in-chief' of right backs continued in his blazing form with another 'fresh palmwine' finish.

He has now scored in 4 consecutive EPL games for the first time, with a total of 5 games. I hope it's clear to Josè that Alexis should never be seen close to the left wing.

5. THE NUMBER 9 'WAHALA' CONTINUES
With Lukaku's recent poor form and now injury, Josè has got a new headache; who should be United's target man? 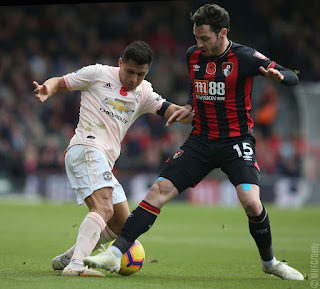 Alexis was played there today and didn't quite fit in. Although, he had some good run-ins and link up play, his penalty box presence wasn't felt.  His assist for Martial was however well deserved.

IN THE END, It was another game of two different halves in terms of tempo and style for United. Despite the early goal, our 'Jollof' defender Lindelof deserves some kudos for his continued resurgence.
We need to start off games better.

UP NEXT, Juventus in the UEFA  champions league.
Stay tuned to #ManUtdNaijaFM.

OPINION POLL:
Alexis or  Rashford, who should replace Lukaku?